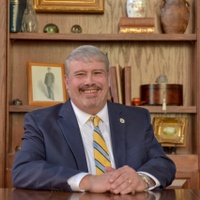 William P. Morgan, Jr. is a Statesville native and local business owner and CEO of Capital  Management Group of the Carolinas, Inc. founded in 1990. He graduated from Wake Forest  University in 1985, completed post-graduate courses at the American College/Wharton School
and is a graduate of the UNC School of Government. He is a member of the International Association of Registered Financial Consultants and holds membership in the Financial Planning  Association, the National Association of Philanthropic Planners and the National Ethics Bureau. *He was named to Who’s Who in Finance &amp; Industry and named a Top Wealth Manager in North Carolina by Bloomberg Magazine.

William has served as a Deacon of First Presbyterian Church of Statesville and as a Youth Soccer Coach. He has also served on the local boards of the American Heart Association, American Red Cross, Dove House and the Campaign Committee for the United Way He is a past member of the NC League of Municipalities Tax &amp; Finance Committee, the NC Freight &amp; Transportation Committee and the NC Financial Literacy Commission, an appointment by Governor McCrory, past President of the Fourth Creek Rotary Club and Vice Chairman of the Statesville NC Planning Board.

*Disclosure: Awards or rankings within are not indicative of future success or results. They are not to be interpreted as an endorsement of the Financial Professional. Investment results are not a factor in considered in these awards. Criteria for the awards may vary and you should consult the award provider for more information.